Come in, and shut the door, it's cold out there!

The Hearthstone NSE Team Championship for the Winter 2020 season is well underway; we’re here to take a look back at the last three weeks of play and see who’s on the path to playoffs!

This season comes with a slight change to the format of the Hearthstone championship; whilst previous championships have played out across eight weeks, it has now been shortened to five, with four weeks of swiss immediately followed by the playoffs. No longer are the top eight guaranteed a spot, only the top six make it through to the final stage, meaning every point counts in this condensed format! Whilst the top six go through, the two teams at the top of the table get a bonus of automatically being promoted to the semi-finals, allowing the best performers a brief respite before battling it out again.

The in-game format hasn’t changed, still going by the tried and tested Best-of-Five Conquest. Each team brings four unique decks, with the opposing team choosing to ban one. Each team must get a win on each of the three remaining decks. Once you have won a game, the winning deck cannot be used again. This goes on until one team has claimed victory with each of their decks.

The Teams and the Table

With week four coming up, the table below shows the current standings, giving us an indication of who will be making it through to the top six! 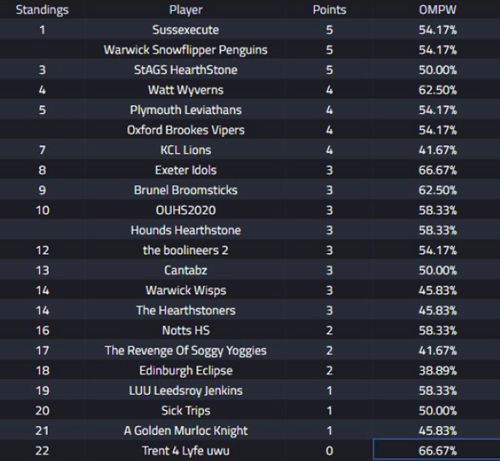 Sitting at the joint top spot is Sussexecute; seemingly a mainstay of the NSE Hearthstone scene, Sussexecute are once again trying to replicate their success from two winters ago. Week one and two saw four incredibly decisive series; dropping only three across the fifteen games played. Week three saw the team falter, although a series win over StAGS Hearthstone got them close to a clean record, In round two they were denied the 6-0 by Warwick Snowflipper Penguins, with a series that went all the way to game five. The roster remains mostly unchanged from years previous, but this term has marked the arrival of newcomer ‘Zacowner’. This year has also seen the return of ‘HelloLeeroy’, a team member from the original winning lineup. Could he be the key to Sussex’s success?

Joining Sussex at the top is Warwick Snowflipper Penguins; a team of relative newcomers to NSE Hearthstone, although the team is captained by a previous competitor ‘Hadrex’. Their journey to the top hasn’t been quite as smooth as Sussex’s, dropping a series 0-3 to Exeter Idols in week one. Determined to prove themselves they beat out Brunel Broomsticks and OUHS2020 (Oxford) in week two, and in week three took down KCL Lions and Sussexecute to take their shared first place. With this placement, they have proved they are not a team to be underestimated, showing that new blood can easily overcome old names. They’ll be a team to watch going into week four.

Coming in at a close third is StAGS Hearthstone. Another team who has had a significant presence in NSE, with multiple high level finishes (including taking first place last winter), they are a team also looking to replicate previous success. Returning champions ‘Fing451’ and ‘rubenlj’ are joined by fresher ‘Lavalele’ for this term. StAGS had a similar trajectory to Sussexecute over the previous weeks, with yet again only three games dropped across a fifteen game spread in weeks one and two. Week three followed a similar pattern; two back to back close series, splitting the evening 1-1. Whilst in third, this is only decided by OMPW, meaning taking two wins could leave StAGS in a clear first place, guaranteeing them a semifinal spot.

Following behind in positions four and joint fifth are Watt Wyverns, Plymouth Leviathans, and Oxford Brookes Vipers; Watt Wyverns being the new home of ‘Gernemi’, former captain of Manduin, runner up in the 2019 spring season. All three are still in contention for playoffs, but with so many teams just inches apart in the rankings, week four will be a real test for anyone with their eye on the prize.

No Hearthstone article is complete without a deck breakdown and analysis. The chart you see before you is no lie; not a single team brought Warlock in either week one, week two, or week three. The black wedge at the top actually represents the singular appearance of ‘Zayle, Shadow Cloak’, which was brought in week one by ‘Sick Trips’ (Brunel University). 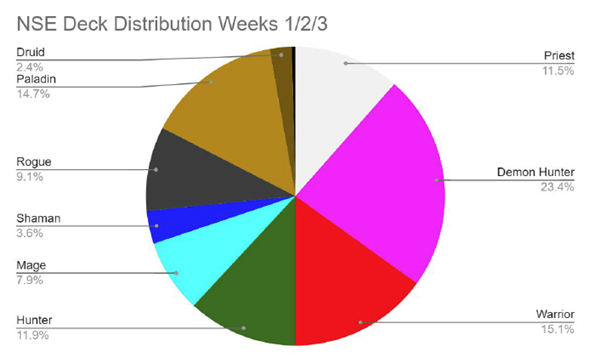 The most notable deck over the last three weeks has been ‘Soul Demon Hunter’, with nearly every team bringing it each week. It’s ability to deal huge amounts of burst damage from hand (utilizing ‘Soulshard Lapidary’, ‘Twin Slice’, and ‘Marrowslicer’ ), its impressive healing (through the use of ‘Aldrachi Warblades’ ), and its relatively cheap crafting cost (around 4000 dust will get you an extremely competitive build of this deck), has made this Demon Hunter list extremely popular.

Following behind is Warrior, split mostly across two builds, ‘Control’ and ‘Bomb’. The game plan of ‘Control’ is self-evident; use large quantities of removal cards to manage your opponents' threats, then finish them off through either attrition or placing down a large threat they cannot deal with (most usually taking the form of ‘Rattlegore’). ‘Bomb’s game plan is also simple; fill the opponent's deck with bombs whilst applying pressure with weapons, and eventually, their hero portrait should explode. This archetype also uses heavy removal, it wants to keep the board clear, using the weapons in the deck to deal damage directly to the opponent.

With the release of ‘Madness at the Darkmoon Faire’ right around the corner, will we see a drastic shakeup in the meta? Will Warlock ever return to NSE? Will ‘Yogg-Saron, Master of Fate ’ be competitively viable? You’ll have to tune into the play-offs on the 23rd of November to find out!