The BUEC Winter season is over! The games are finished and the points have been counted. 98 universities have joined the fight to be crowned Esports University of the Year which will happen at the end of spring. Let's see what happened...

Consistency is key and interestingly, the top two universities in our standings are in the exact same places as they were in Winter 2020. University of Warwick is leading the pack with a staggering 2,037 points with Staffordshire University following in second place. Loughborough University has swooped in to claim third place after finishing in sixth last winter.

The University of Manchester is the most improved university, UoM Esports placed 46th last year and are now sitting at 16th - a HUGE leap of 487 points!

There is plenty still to play for, not least in the top ten leaderboard where there is only a 47 points difference between fourth-placed Southampton and seventh-placed Birmingham. Compared to last year there are five new universities joining this exclusive top ten group with Swansea University, University of Birmingham, University of Exeter, University of the West of England and University of Bath all displaying impressive performances.

There has been fierce competition right across the UK with the regional rivalry hotting up ahead of the Spring Season. The current standings of the Best Regional Esports Universities for Winter 2021 are:

Well done to the teams that performed well this winter, but don't get too comfortable, with small point differences between many teams, everything could change in our Spring season!

Keep your eyes and ears open for sign-up announcements in January. 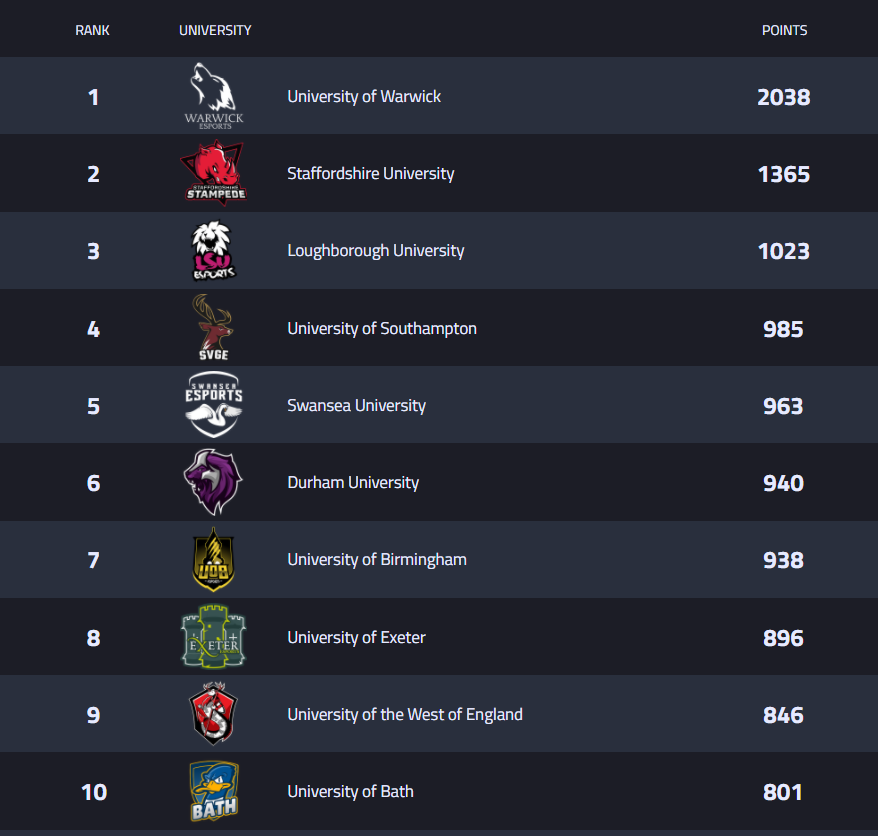 You can see the points table overview here and a full breakdown here.

Winning Teams and Players of Winter 2021