Things you might have missed about the upcoming Turkey Day and Toy Day in ACNH!

Let’s take a better look at the two upcoming events in the latest winter update – here’s the video if you haven’t seen it yet!

SPOILER ALERT: This article will cover events (Turkey/Toy Day) and items that are not available as of yet – data-mined images will also be shown! 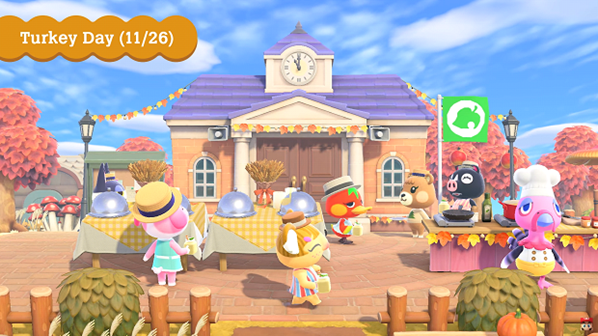 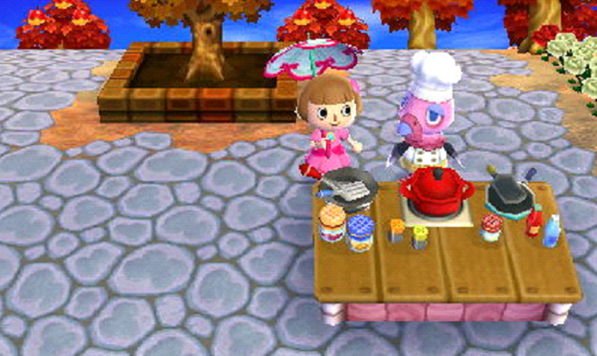 This first scene of the event shows our villagers dressed up in little straw boaters and holding a fruit drink to celebrate the occasion, as well as Franklin’s familiar cooking table on the right. We can see some tables set up which could be new in-game items, but could be a special non-obtainable item much like the town hall green bench we see from time to time.

During the event in New Leaf, Franklin would ask players to gather ingredients to help him create four dishes. Each dish had three ingredients and a possible fourth secret ingredient. The ingredients were easy-to-obtain items like fruits, fish, mushrooms, and sea critters. Vinegar, butter, milk, sugar, and flour were special ingredients only available during the event. Villagers would request an item (usually fish) and would trade these special ingredients with you. After helping Franklin with a dish, he would reward you with an item from the Harvest furniture series or a fruit basket and if you completed all four recipes with the correct secret ingredients, you would be rewarded with special cornucopia item. 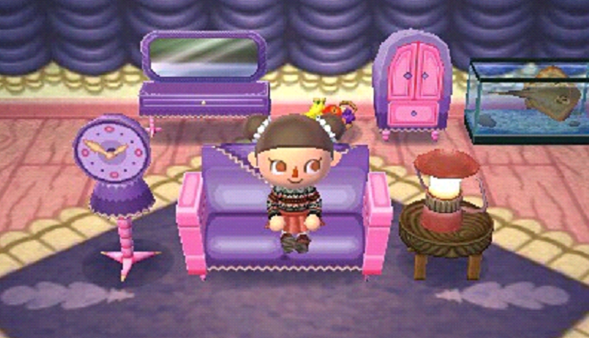 The Turkey Day event for New Horizons looks like it will work similarly to its’ New Leaf counterpart – but with a better range of ingredients available, such as the pumpkins that came with the last update. It might be a good idea to start stocking up on fish to save yourself some time running around trying to find a specific type of fish on the day! 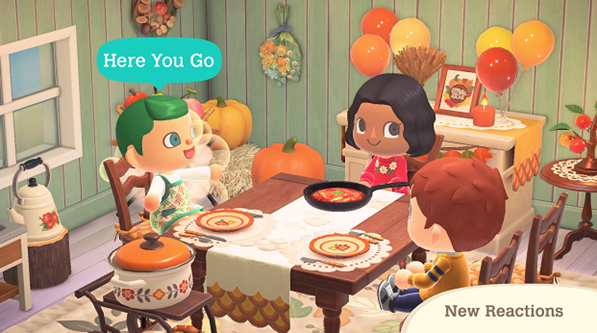 (One of the new reactions available from the Nook Stop)

Later on in the video, we see this scene which shows off a couple of new items – possibly the new Harvest furniture series for Turkey Day, or perhaps new craftable items?

In the bottom left, we see a cute little casserole dish with some floral patterns. The set also features a 2x2 dining table with a tablecloth, and appropriate Harvest table settings – the chairs seem to be part of the set too. Against the back wall, we see a 2x1 fireplace and some decorations on top. Finally, we also catch a small glimpse of a new square rug on the floor!

Jingle is back in town this Christmas, and it looks like he’ll be needing a helper to give out gifts again! 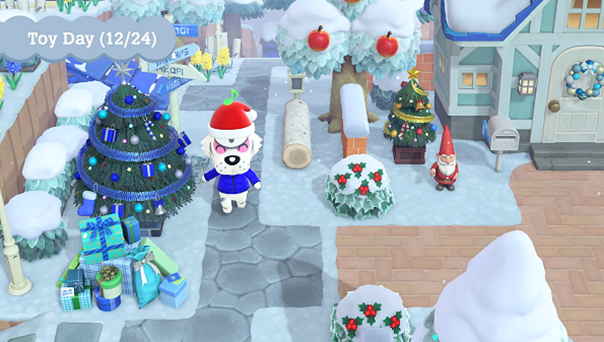 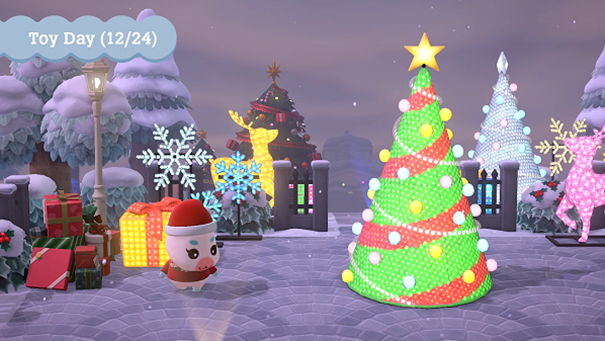 Straight away, we can already see a pile of wrapped presents in the bottom left of both images. This is likely to be a new item (or DIY craftable) that can be recoloured using customisation kits. We also see a bunch of festive trees and illuminated decorations. These are already available in-game as winter DIY cards that can be found randomly by shooting down balloons. Notice that the villagers are also sporting very cute Santa hats (and it’s snowing)! 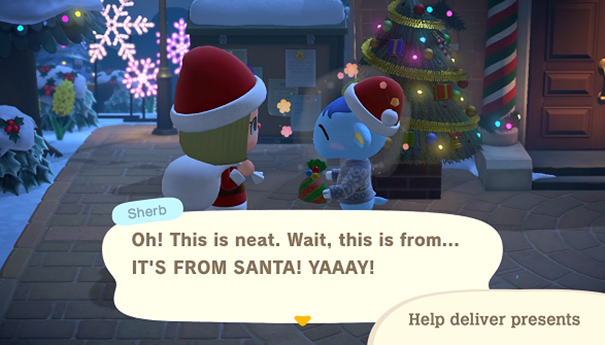 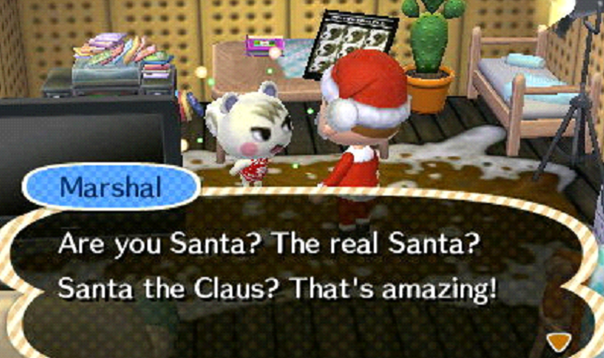 Just like with Turkey Day, Toy Day in New Horizons looks like it will be a very similar event to the New Leaf version. In New Leaf, in the weeks coming up to Toy Day, villagers would hint about the types of presents that might want from Santa. On Toy Day, Jingle the reindeer would ask you to dress up as Santa – clothing items that were available to purchase from the Able Sisters throughout December – and deliver presents for him. Jingle would then hand you the ‘Santa bag’ (seen in the New Horizons screenshot above, over the player’s shoulder) which contained presents suitable for each of the villagers and you would have to guess based on the hints they gave throughout the month. Once handed out, Jingle would then gift you an item from the Jingle furniture series – and if you handed them all out correctly, Jingle would mail you his photo the next day. 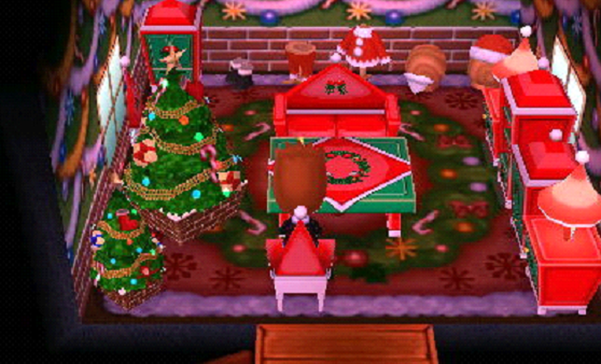 It seems you will still need to dress up as Santa for the upcoming New Horizons Toy Day, and presents will be wrapped using a festive red and green wrapping paper as seen by the present held by Sherb the goat (see above image).

We also see a falling snowflake which appears to be ‘catchable’ just like the maple leaves – this is the material for crafting a lot of the winter seasonable DIYs. 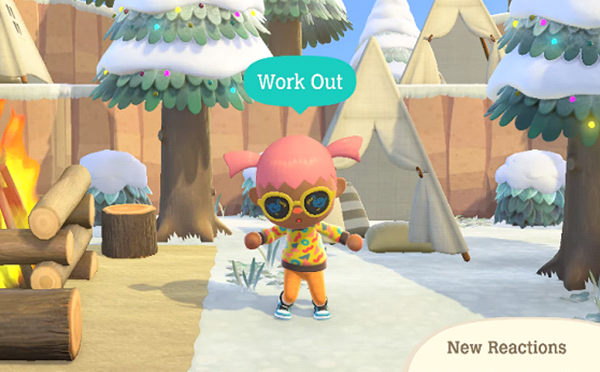 Whilst demonstrating the new ‘Work Out’ reaction, in the background we can see two pyramid-shaped tents that haven’t been seen previously – this seems like a new seasonal item that might be available to buy in Nooks. 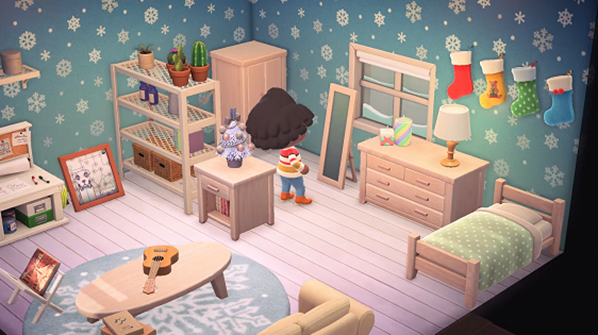 Finally, we see a line of Christmas stockings above the player’s bed – another new item that might be available to buy from Nooks. We see a mini festive tree behind the player and a snowflake wallpaper for the room. These are both DIYs available during the festive season and can be found randomly in balloons.

Make sure to update to the latest version of Animal Crossing: New Horizons if you haven’t done so already – and pick up your (customisable) yule log from the mail!

Island Tours Competition Review
After so many wonderful islands were submitted for the NSE Island Tours Competition, we shortlisted five and reviewed them live on stream. Here's the review.
Isabelle
last month
Sweet Dreams are made of Islands!
With the announcement of the Island Tours Competition, you may be debating dusting off your switch to join in on the sleepy festivities, but how do you do that? Read on to find out!
Charlie Baxter
2 months ago
Animal Crossing November Event Announced
The November event is here and we want to tour your best and most wonderful islands! Time to tidy your flower beds, de-weed your gardens and get furnishing.
Isabelle
2 months ago

Animal Crossing: Jersey Design Competition
We've had so many great & wonderful jersey designs submitted, now it's down to you to cast your vote on which is your favourite!
Isabelle
3 months ago
Top Tips For Starting Your Island Getaway Package
With Halloween around the corner, and the NSE x Animal Crossing community launched - what better time to dust off your switch, water your flowers and say hello to your villagers from a time that lockdown forgot than now?
Charlie Baxter
3 months ago