Over 70 teams entered the NSE Siege Championship to fight for the chance to be crowned the NSE Champions; nine weeks later only two remain. As we rapidly approach the Grand Finals of the Winter 2020 season, we take a look back at the startlingly aggressive match between Swansea and Newcastle to determine which would qualify first for the Grand Finals.

As well as the expected high stakes of the match, both teams came into the match with something extra to prove with both having their best seasons in a year.

Newcastle had been enjoying a welcome return to the Championship, after two seasons in Challenger League, while Swansea were looking to prove that they are better than the mid table Championship team they had been for the Winter and Spring championships.

With Swansea picking Villa for our first map, we expected to see a very carefully played and defender sided game. However Newcatle, and Scipi0 in particular, had different ideas; playing an incredibly aggressive style of siege that is uncommon to a map as tactical as Villa.

Swansea began their map choice on attack and it was immediately clear why they had chosen Villa as they pulled off a well-executed and confident “flawless” attack onto Aviator/Games including a plant from SugarHoney. Although Newcastle were able to  recover and win the same site in the next round, Swansea also took the third round on Trophy/Statuary.

Newcastle rallied, however, to take 2 convincing rounds, with MrJoe getting 3 kills on their second attempt at Trophy/Statuary, while round 5 saw Newcastle collect a flawless round of their own on Aviator/Games. Thisforced Newcastle to go to their tertiary site, Dining Room/Kitchen, which Swansea won thanks to their effective use of vertical pressure before collapsing onto site to finish the round.

Swansea’s defense started in the same fashion as their attack with a “flawless” defense on Trophy/Statuary in which Mcie collected 3 kills. Rather than going to the expected secondary bombsite of Aviator/Games, they chose to go to Dining Room/Kitchen for their next round in a likely attempt to throw their opponents off. The gamble failed, however, with Newcastle taking the 8th round, aided in no small part by MrJoe getting another 3 kills.

Round 9 saw a continuation of Scipi0’s aggressive plays as he attempted a single man rush, before slowing down to allow his team to catch up. Swansea responded with a solid defense, refusing to give Newcastle any free picks and only losing one man as they won the 9th round.

Round 10 produced an archetypical time wasting roam from the Melusi of ffolineb, wasting around a minute of the attack’s time and a good amount of their utility, including drones, flashes and a grenade. This meant that although he died without a kill, Newcastle went into their site execution with fewer tools to deal with the utility placed by Swansea. However, Newcastle managed to deal with enough of the defender’s utility to force their way onto site to take the round. On their return to Trophy/Statuary in the next round, however, Swansea won to go into round 12 on match point.

Despite planting the defuser, the final round of regulation ended in a heartbreaking defeat for Newcastle as Scipi0 was unable to clutch the post-plant 1v2, despite scoring a 3k during the round, allowing Mcie to disable the defuser and earn Swansea the first map of the series. 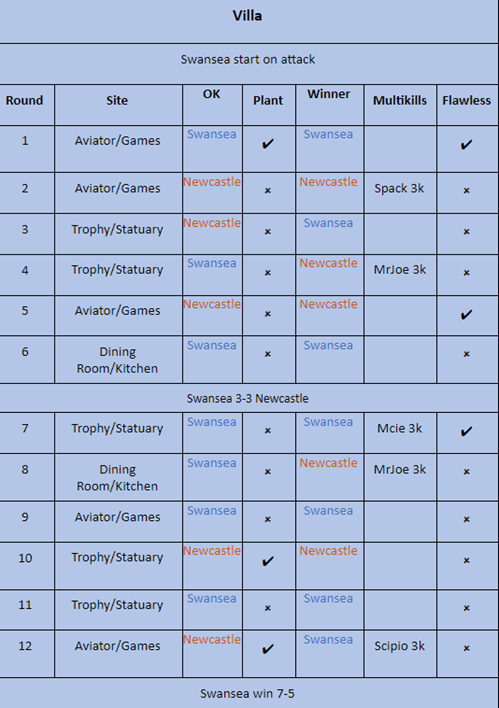 With Swansea’s map pick ending in a close 7-5, Newcastle were undoubtedly confident going into their own pick, Clubhouse, especially with the particularly aggressive style of play they had used in Villa which is more commonly seen on Clubhouse.

Swansea started their defensive half on Cash and CCTV, though they looked unsure of how to handle the attack as Newcastle took the round reasonably comfortably after a plant from Belty. Swansea were able to successfully defend the same site in round 2, though it was a very close round as Newcastle ran out of time despite a man advantage throughout most of the round.

The third round would continue the trend of scrappy round ends as two defenders got downed during the Newcastle execute. Fortunately for Swansea, Mcie managed to kill Newcastle’s defuser carrier as they attempted to plant the defuser, allowing Swansea to take the round on time.

Newcastle took the fourth round on Gym/Bedroom, but when Swansea took them back to CCTV/Cash for round 5, they showed that they had learnt from the first two rounds with a much more decisive round which included a massive C4 at the end from Kueist:

Their confidence carried through to round 6 as they won Church/Arsenal to finish their defensive half with a  4-2 lead. Though an expected result for the map, Swansea would be pleased to have overcome their shaky starting rounds.

Swansea’s first attack was relatively slow, with their players being picked off steadily to leave them in a 2vs5 with a minute to go. Although they managed to kill 2 of the remaining defenders, it was too much to ask of the attackers as Newcastle easily eliminated the remaining players to take their opening defensive round.

Round 8 produced a bold and patient flank from Asteck which, after spending the majority of the round well away from the action, netted him 3 kills and was integral to Newcastle winning the round to even the score at 4 rounds apiece:

This was, unfortunately, the last round that Newcastle won, as Swansea pulled off strong attacks on Gym/Bedroom in round 9 and CCTV/Cash in rounds 10 and 11, including successful defuser plants in both rounds 9 and 10. 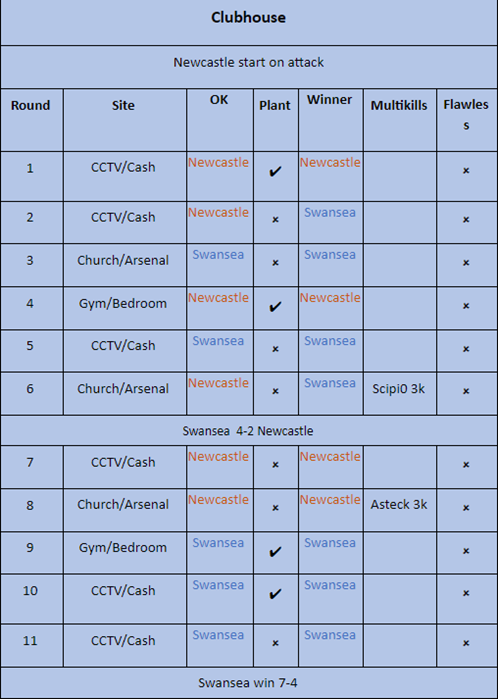 Swansea’s 7-4 victory on Clubhouse secured the series in a decisive 2-0 victory, earning them their place in the Grand final. Although the whole Swansea team played well on both maps, Mcie in particular had a fantastic game, with a K/D of 27/13 over both maps As his captain put it “he’s insane”.

"We felt confident considering our performances across NSE and NUEL, however we expected Newcastle to be tough. We haven't played many aggressive teams this season so they did a great job of keeping us on our toes. We're confident for the final; we've played a couple of strong teams already but honestly we don't feel threatened by anyone." - SugarHoney, Captain of Swansea Storm Green.

Newcastle’s 2-0 victory over Cardiff Crusaders in the lower bracket final on Friday night has set us up for a rematch between these two titans for the Grand Final. Will Swansea be able to replicate their dominating performance in the upper bracket final or will Newcastle get their revenge? Be sure to tune into the NSE Grand Finals (embed twitch.tv/nse_gg) to see which of these two teams will be crowned the NSE Champions.